The Best 30 Minutes of a Child’s Day

Lest I be accused of plagiarism, the title of this article isn’t my creation.  Rather, it’s the actual vision statement behind the immersive retail experience known as the Disney Store.  Try as I might, I couldn’t come up with a better hook.

To see the magic of the new flagship Disney Store in Times Square illumined at a candlepower befitting its high-lumen location, start by recalling that the chain was rescued from bankruptcy only a few years ago.  The resurrected global chain now has over 5 million people per day walking by one of over 370 locations.  In Times Square alone, over 8,000 pass by per hour.  But this isn’t a typical “location, location, location” retail success story.  It’s Brand, Location, and Technology.

Of the 200 million annual passers-by who actually enter a Disney Store, about 60% are what Disney calls their “Best Guests”; consumers who patronize their theme parks, subscribe to their media channels, go to the movies (AT the movie theater), and addictively purchase all manner of Disney paraphernalia.  That’s not by accident.  It’s the result of careful crafting to deliver a brand experience at a retail level on a par with the brand experience at the theme parks or in the movie theater.

We spoke with Paul Gainer, VP and GM for North America, about his experience during this turnaround.  “For me it’s been a great two and a half years,” beamed Paul, “but the best part has been seeing the children and their families, connecting  with the brand in-store, and connecting with each other in that experience.”

Actually, it isn’t about brand, location or technology.  It’s about the children, true to the vision statement.  And the technology is the enabler.   “We utilize the technology to improve the child’s experience,” Paul told us.  “The child controls which princess they see, which film clips.  Each child sees what they want to see.”

But that’s just the first step.  For the full trick, the parents have to have a positive experience, too.  And that is where the technology comes in again.  Disney spent the last year and a half re-platforming their Point of Sale (POS) system, globally, with 1,500 plus new registers across stores in seven countries, in five languages, and with four currencies.  On top of that, they added mobile terminals in fifty stores, achieving results that will have them continuing the mobile rollout throughout 2011.

Disney’s POS technology implementation is nick-named SIMBA (Single Integrated Merchandising Business Application), as developed and deployed by a team of vendors including Oracle and Deloitte.  On the child-facing side, techno-magic behind the scenes includes RFID, iPod Touch , and other interactive displays.

While Disney’s Consumer Products Division claims to be “the most successful in the world”, the retail focus is not only about the product. 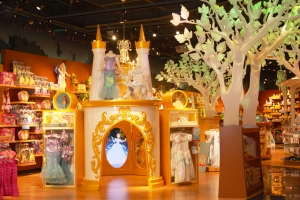