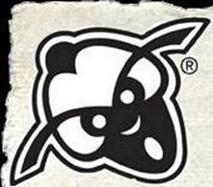 Look closely.  What do you see?  First, it’s a graffiti image by the street art impresario known as “Phetus”.  In fact, this is his trademark image, the “Phat Phace”, which according to his website “… has been infamously scrawled across the globe.”  And when we say trademark, we mean that literally.  That’s what else you see, the even more infamous circle R that denotes an actual registered trademark.

“We wanted to get into all these things,” Phetus explained with a heavy sigh, but we just didn’t have the funds to launch any of it the right way.”

When we found Phetus and the Elite Gudz group, they were very definitely doing it the right way, with a spacious corner at Comic Con, complete with comfy leather couches from which passers-by could admire the artwork and listen to a series of in-booth guest artists rap and spin their tunes.  It was a destination location on the show floor.  So where’d the coin come from?

The woebegone look on Phetus’ face at this point turned to a broad grin as he held up his iPhone and began to shake it.  On the screen was the image of a can of spray paint, branded with the Concrete Immortalz logo.  And sure enough, as he shook it, it made the distinct rattling-ball-bearing sound of a real can.  Then he picked out a suitably urban background, chose his color, and began to spray with the usual fluent graffiti motions.  Shhhhh went the phone.  Lo and behold (and public nuisance free) his masterpiece appeared onscreen.

‘Graffiti Spray Can’ is a free app store download, which in the few short months since its launch has already garnered over 4,000,000 downloads, making it – according to Phetus – the #3 free app on iTunes.

While others struggle with monetization schemes, Graffiti Spray Can simply added an advertising feature to the top of the screen and, shake/shake/shake, money sprayed out.  Enough money for merchandise, promotions like this, and a splashy intro for the artists’ latest project, the elite movable cubes (“you know,” said Phetus, “e=mc cubed!”), artistic originals that you can browse and buy at www.elitemc3.com .

Phetus wouldn’t smile for our camera.  He’s got to watch his street cred image.  But trust us, beneath that bohemian ennui is a happy capitalist iTunes success story. So we tip our cap to Phat Phace (just not a Yankee cap, heaven forbid) and wish that he may, to quote Yeats, “… pluck till time and times are done / the silver apples of the moon / the golden apples of the sun”.